Iulian P.
In the second day of the 2020 Powerpc Challenge I tried to perform a few usability test: First I tried to do some light browsing using Ten Four Fox which was kind of slow on my Powermac G4 . Modern web pages loaded slowly but correct. Next I tried watching an Youtube video with TonVid and PPC Media center which was an absolute success.
https://www.youtube.com/watch?v=KIv_tjCdek8&t=14s 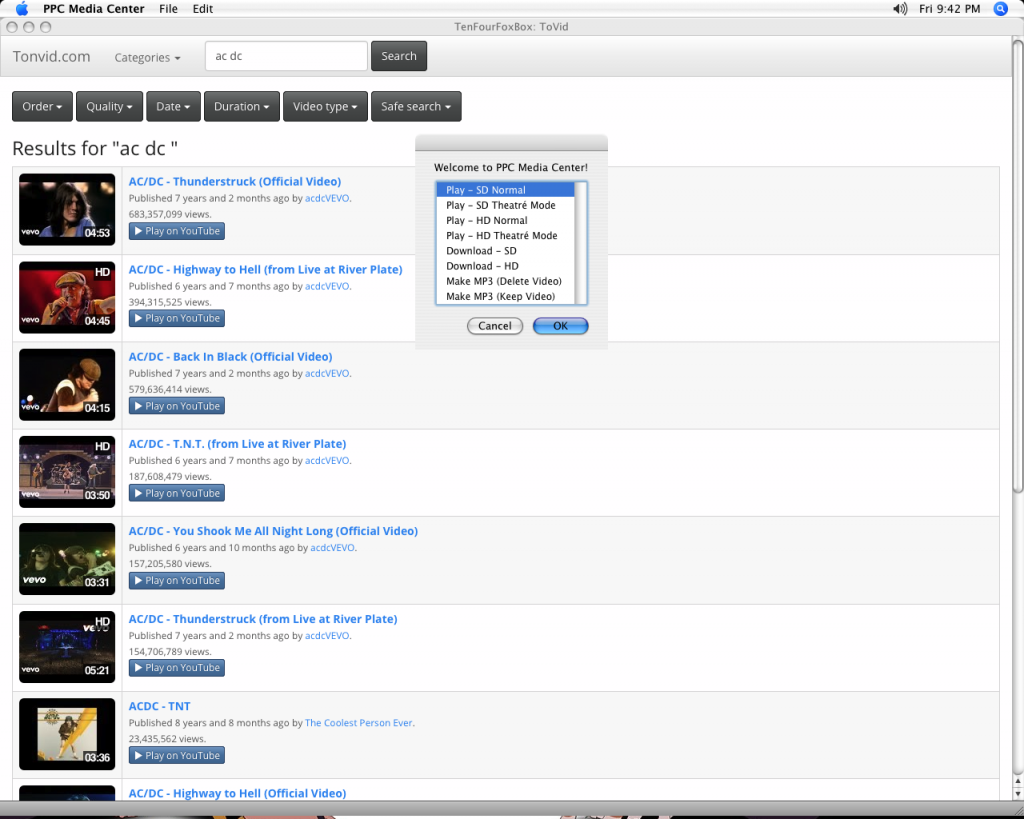 Jay V.
I spent my day at the office and we had a party to attend after work, so didn’t get home until 11PM. Needless to say my first day of the PPC Challenge will only see about an hour of PPC-ing. So let me tell you instead what I will be using my Power Mac G4 for during this challenge.
This year I will not be using Mac OS 9 for work. It’s installed so I can boot into it whenever it’s needed but besides Unreal Tournament ’99 I doubt I will need it for anything. Mac OS X 10.4.11 Tiger is what I’ll be using for most of this challenge.
Primary uses will be email (Mail app), Pages & Appleworks for writing, TenFourFox & Safari for browsing and Dreamweaver, Photoshop, Sequel Pro for web work. iTunes will also be heavily used.

In Mail I have about 8 IMAP accounts set up and iCloud email as well. It works as well as it always has and gets the job done perfectly. For writing I use Pages and AppleWorks not because of different features but because I like the look and feel of AppleWorks once in a while. They both run great so I have no preference.
Safari is the faster browser on Tiger but there are a lot of websites it can’t load because of SSL certificate issues. This is where TenFourFox comes in which is a LOT slower but more compatible with most websites. Dreamweaver and Photoshop are my primary tools for working on my websites. I have no need for fancy filters and plugins so I can do all the work I need to do just as well on this Mac as I can on my Mac Pro with the latest Creative Suite. Something I was unable to pull off in previous years was update my SQL database. With the help of Bruce (Branchus Creations) I am now able to finally do that as well! Sequel Pro and CocoaMySQL work really well.
iTunes 9.2.1 is able to read the shared music libraries from my Mac Pro so I have access to all my music, right here on the G4. And with the Apple Pro speakers that music sounds fantastic too.

Something I have yet to figure out is using Discord on the PPC. Through the web browser it’s simply unusable. Someone is working on a way to get into Discord through a Jabber app or something but I haven’t seen or tested this yet. I’m hoping this is something I can get done through Adium.

I began the 2020 PPC challenge right after Mac Yak, but being in Australia, this meant that I was starting on Friday afternoon instead of Thursday evening. Unfortunately the very first task I had to complete was a video conference with a client, so I was forced back onto my modern Mac almost immediately.

I’d actually struggled to find a suitable computer for the challenge. I have lots of 68K Macintoshes, but not many PPC (well certainly far less than my 68K collection). I had a rummage around and found a 1.4GHz Mac Mini, maxed out to 1GB RAM with a 320GB hard drive. It had OSX 10.5.8 installed, but I was encouraged by fellow Mac Yakker, Jay (HouseOfMoth) to use 10.4.11 instead. With only 1GB of RAM, 10.5 was going to slow the Mini to a crawl.

I set up my Mail, installed MS Office, Adobe Creative Suite 3, TenFourFox iStat Menus, and SequelPro. I also installed Photoshop 7 and Illustrator 10, just in case the CS3 versions were too bloated and slow. The funny thing is that out of all of this powerful software, the one thing that absolutely killed the Mini was web browsing. The version of Safari included with 10.4 (v4) is quite fast, but it won’t display websites with modern SSL certificates. WebKit is a great browser for OSX 10.5 or later, but under 10.4, the painfully slow TenFourFox is the only option. After a few hours of using the Mac Mini, I came to the conclusion that this wasn’t going to work. This was false start 1.

After another computer hunt, I found a 1.5GHz 12” PowerBook in the cupboard with 1.25GB RAM. This gave me a little extra RAM and CPU speed, but after a few minutes of testing, it was clear that this computer gave very little improvement over the mini. Hello false start 2.

Very late on Friday night (after a few glasses of fermented grape juice) I finally made the decision I had been avoiding since I found out about this challenge – I needed a G5. I have a dual 2GHz G5 tower that I have owned since buying it new in 2003, but I had put it away into storage a few years ago. It was always the best candidate for the challenge, but because I live in a small house (already overrun with vintage Macs), I had been desperately trying to avoid dragging this gigantic lump of aluminium back into the house. But with 3GB of RAM and a newly installed 1TB SSD, this was going to be a lot easier than working with the Mini or the PowerBook.

On Saturday morning, I collected the G5, installed the 1TB SSD, installed 10.5.8 (sorry Jay!), Adobe Creative Suite 4, WebKit, and all of the other apps I mentioned earlier. While 10.5 may be a more bloated OS, it certainly provides a better variety of software options.

Given that today is Saturday, I didn’t actually spend much time in front of the computer, other than setting up the G5, doing a bit of browsing and writing this report. However, so far I’m feeling pretty optimistic. I’m actually genuinely surprised how zippy this G5 feels. I miss some of my cloud tools, such as Apple iMessage and Notes, and for some reason Facebook keeps displaying the Mobile version of the website in WebKit, but other than that it’s pretty solid, and I don’t feel like I’m missing out on much at all.

WhackedMoss3
Hello, Am away from home in a small country township in rural Australia, the G4 has come along for the ride.  Light and easy to balance on my lap, I am making the most of my time away to make notes on unfinished projects and builds planned for later this year. The long car ride gave me many opportunities to compose wish/want lists. Forgotten copies of drawings and intermittent internet connection are minor inconveniences when said and done . Tomorrow as we journey towards our destination  my sturdy little friend will be by my side.

Theo K. (The first one I know of to run OS 9 for the PPC Challenge this year!)
Hi!
A late status report, but I’m doing just fine on my 1Ghz TiBook.
Currently running Mac OS 9.2.2 and even though I have Tiger as well on the machine I tend to use 9.2.2 the most. I have been making music with Reason 2.5, I have worked on my XMPP/Jabber client in REALbasic 3.5.2, made some website work using Photoshop 7 and Classilla and sent some email using the email client built into Classila. It works just fine with my Google account as well. And of course, I have chatted with my friends over Facebook Messenger, Skype, Discord , Steam and ICQ. Of course using Mac OS 9.2.2, Jabbernaut and the Macintosh Garden IM Gateway.
A guide on how to set up Discord and the other messaging protocols under OS9 can be found at http://jabber.macintoshgarden.org. Incomplete, but it’s there.

Until the next time 😉
-Theo 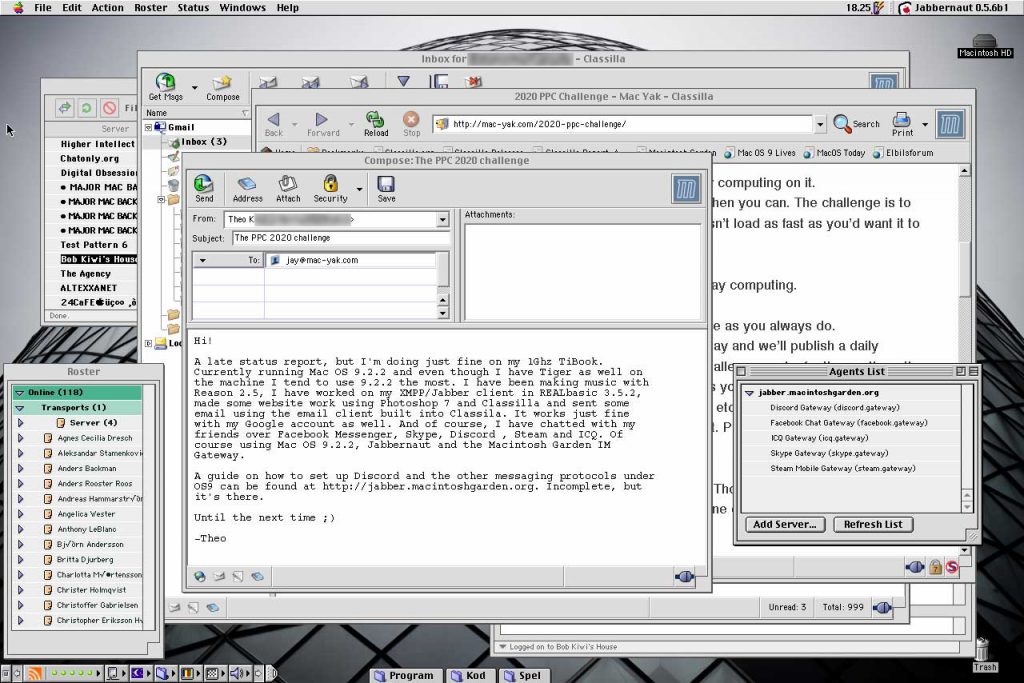 I got started a little late but better late than never right? My G5 and MDD G4 are both put up in a closet so I started this challenge with the G4 Mac Mini. I did some web research for my side job which that went fine, web pages load a little slow but not too bad. Tried to watch youtube with TenFiveTube but the app would not load YouTube, so I switched over to TenFourFox. So, so bad. YouTube would load but playback was HORRIBLE! So I gave up on YouTube.
When I got home I pulled my MDD out of the closed and set it up. It’s so much faster than that Mini. TenFive Tube worked on it, don’t know what the difference is.
I put the Mini up and am just using the MDD now.
My G5 has a bad power supply otherwise I would definitely be using it.
Evan
Mac Mini G4 1.5GHZ, MDD G4 Dual 1.42GHz

That’s it for today! There are many people participating in the PPC challenge this time around but not everyone feels like keeping a log which is understandable. If you do decide to keep some kind of log and want to share it with the rest of us, send your info/specs/what you do with it/etc to jay(@)mac-yak.com and I’ll publish it here on the site.