I have had my Mid 2017, 27 inch, iMac for about 2 years now. I play iRacing which is a very intense graphics based game. It taxes the Radeon Pro 570 graphics chip that is in the computer pretty hard, especially when I am streaming to Twitch. Well, lately I was getting lag on my Twitch stream and noticed my GPU was running at about 90C while playing the sim and streaming at the same time. Just playing the sim it would sit around 80C which is way too hot for the GPU. I decided that cleaning and re-pasting the CPU and GPU was in order to make it run cooler.

The biggest problem with cleaning a Mid 2017 iMac is that Apple in it’s infinite wisdom decided to glue the display to the case which made it much more difficult to take apart. First I had to cut the glue around the edges of the glass taking very great care not to break the fragile glass panel. This was actually made pretty easy using the iFixit toolkit and the knife they include to do just that job. It didn’t take me long to get inside but it would never stick again because the glue strips were pretty much destroyed. No problem because I planned on just using tape to keep the screen on to the case anyways to make it easier to get back inside it in the future. If I plan on selling it I will get the proper kit and redo it the right way before I sell it.
After getting inside getting all the components out was pretty much straight forward. In order I had to take out the left speaker, hard disk drive, power supply, right speaker, fan, and then the logic board. I was planning on trying to just take out the logic board and fan but because of the way they put things into the case I ended up having to take everything out. It was all good because it allowed me to clean up the case better than leaving those parts on.

Next step was to remove the heat sink and to clean and re-paste the GPU and CPU. This was actually pretty easy. The old thermal paste was pretty much dried up and not really doing anything to transfer heat to the heat sink efficiently. I cleaned both the GPU and CPU and the gunk on the heat sink and applied new paste. I normally would spread the paste out on the CPU die but because of the location of the CPU under the memory shroud and because there was no latch I was unable to do that so I put the dab in the middle and let the heat sink spread the paste out on its own. I reassembled the heat sink and then reassembled the computer. Upon first try I got no power to anything. I noticed only 1 light on the 5 on the logic board which meant power was getting to it but nothing else was happening. I took the whole thing apart again and realized that I had over tightened the heat sink on the CPU. Also after redoing it I noticed that a pin was bent on the CPU socket. That almost gave me a heart attack because those are very hard to fix. After about 15 min of intense work I was able to get the pin back in the correct position. I replaced the CPU and then put the heat sink back on taking care not to over tighten this time. I reassembled the computer and before putting the display back on I powered on the computer and got fan spin! According to Louis Rossmann I was done. LOL. I put the display back on and the computer booted with not issues.

The first test I wanted to do was on iRacing where I was having the issues in the first place. This meant booting up the computer into Windows 10 under boot camp. Once up and running I was able to use a nice little app on my iPhone from AMD that lets you monitor the GPU in real time. Now before the re-paste I was running 90C while streaming and running the sim at the same time so that was the test I wanted to run first. I started up the stream and ran it for about 30-40 min and the temps on the GPU only got up to 58-59C. That was a big improvement. I was also able to finally crank up my graphics on the sim to max and still ran at the same temp. Next test I did was trying to record a replay of iRacing, which is something I do all the time as well, and got the same results. About 63C while doing that.

In the end I am very impressed with the results as the iMac was pretty dusty and I pretty much used up a can of compressed air cleaning it out. The fan was especially bad and had what Jay V described as cob webs in the outtake. 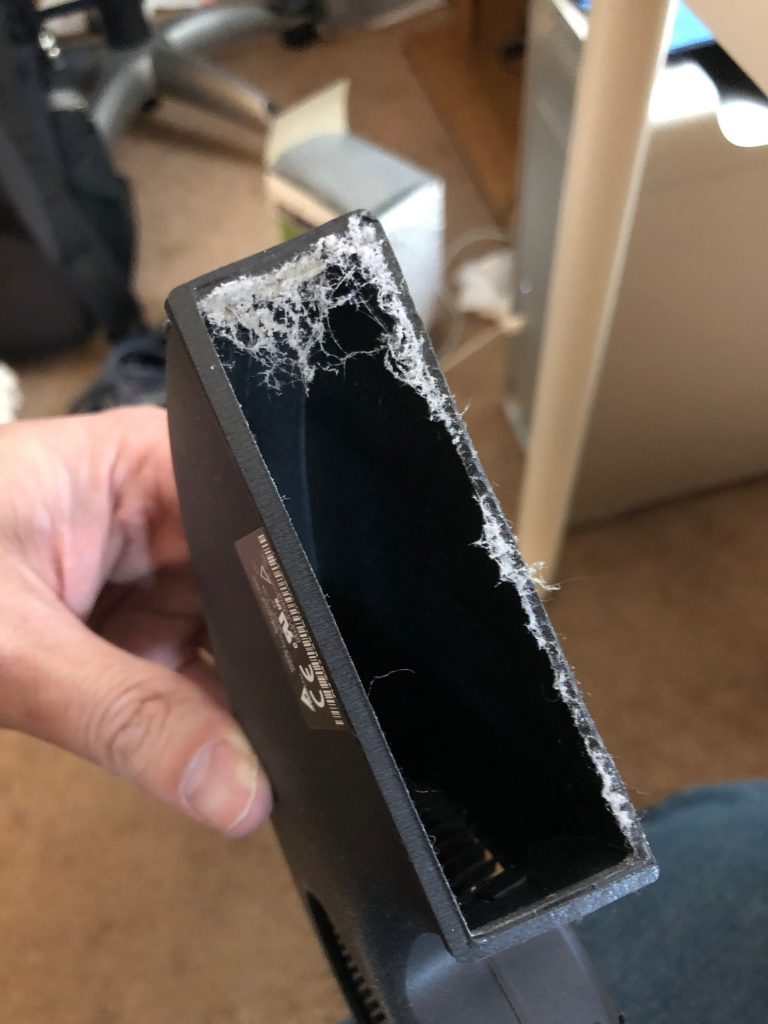 In conclusion I would say this is something that everyone should do if you are experiencing thermal throttling on your iMac. The biggest problem I have with the apple design is that you have to pretty much destroy the glue strips in the process and either you buy new ones to replace it (just remember that you will have to destroy them again if you ever need to clean it out again) or you just leave it off and tape it up on the outside like I did. It doesn’t look great but it works 100% and doesn’t bother me. Thanks for taking the time to read this article and please leave comments below.

4 thoughts on “Fun times in cleaning a modern iMac”