The week is up and here is Greg Thompson with his final thoughts on the 2019 PPC Challenge:

Final thoughts on the PPC Challenge.
Well I had a great time using this old PPC for a week to do tasks that I normally use my 2017 iMac and 2017 MacBook Pro to do. I found out that yes the internet can be used with some caveats. Facebook is awfully slow when using the full Facebook site. When using the mobile site it worked ok but isn’t the best. I think it is Facebook’s bloated code they use that makes it almost impossible to use on a PPC Mac. If you ever seen how slow it works on a modern Mac you would understand why. Watching youtube videos is also possible with some caveats as well. First watching 1080p videos using ten4fox was impossible. You have to watch videos at 360p in order to actually have a decent experience. I was told during our Mac Yak chat tonight that using SMTube you can watch 1080p videos. I will have to give that a try sometime in the future.

Next up is office applications. I used open office at first and works very well on the PPC. You cannot however use the latest version of OO because they stopped supporting PPC architecture. I used version 3.2.1 and it worked well. The only problem with it is that you cannot open or edit Microsoft Word .docx files. That would make it a no go for real office work. Later on in the challenge I found a copy of Microsoft Office 2008 which still runs on the PPC. It does open .docx files however I have not fully tested if it will open modern versions of MS Word files. Something I need to test. I was also able to use my icloud applications on the web, numbers and pages, and it worked ok but was very slow so almost to the point of being unusable.

Email worked really well using the built in mail app in OS X 10.5.8. I did have problems getting my icloud mail working but about two days ago I was told about a site that apple runs that allows you to make an app specific password to use the mail app. Once I used it to create the app specific password my icloud mail worked fine. The site is located at: https://appleid.apple.com

Games run fine on the PPC. We play Unreal Tournament 2004 all the time and I have no problems running full graphics on this machine. Also lots of other older Mac games will run without any trouble using this system. BTW if you didn’t know the xbox 360 was a PPC based system and they used the G5 to design the games for the xbox 360. Click here if you want to read about that.

I also used Gimp to do some graphics work as well on the PPC so doing graphics editing is really easy to do using the PPC. Other media works fine as well. I can watch my itunes video library on my PPC and I have it set to family share as well so I can watch videos on my apple TV’s and on my other Macs as well. Also has all my music on it as well. Itunes may be old but it still works really well. The only caveat is that you cannot watch purchased movies on it as that version of iTunes does not allow you to do that. Any movies that you may have ripped from DVD work fine on the system.

Last but not least is I have been using this computer as a file/media server that stays on 24/7. I have read a lot about how loud these machines are but I think some of these folks have never calibrated their fans so they ramp up full speed all the time. In fact even under heavy load you can barely hear this machine. It is a very quite machine in my opinion. Also I have read that the G5 is a power guzzler and it uses tons of power and you need a nuclear power plant to run it. Well that simply is not true either. My electric bill has never gone up a significant amount the whole time I have been using this as a server so that theory is also wrong. It might use a bit more power but as a server at idle it barely sucks power and again I have not noticed it on my electric bill.

Overall the challenge was a success for me. I enjoyed it very much and will continue to use this machine but probably not as much as I used it the last week. I do enjoy playing older games on it so that will continue as well as it being my server. Well that is all folks and hope you have a great PPC Day! 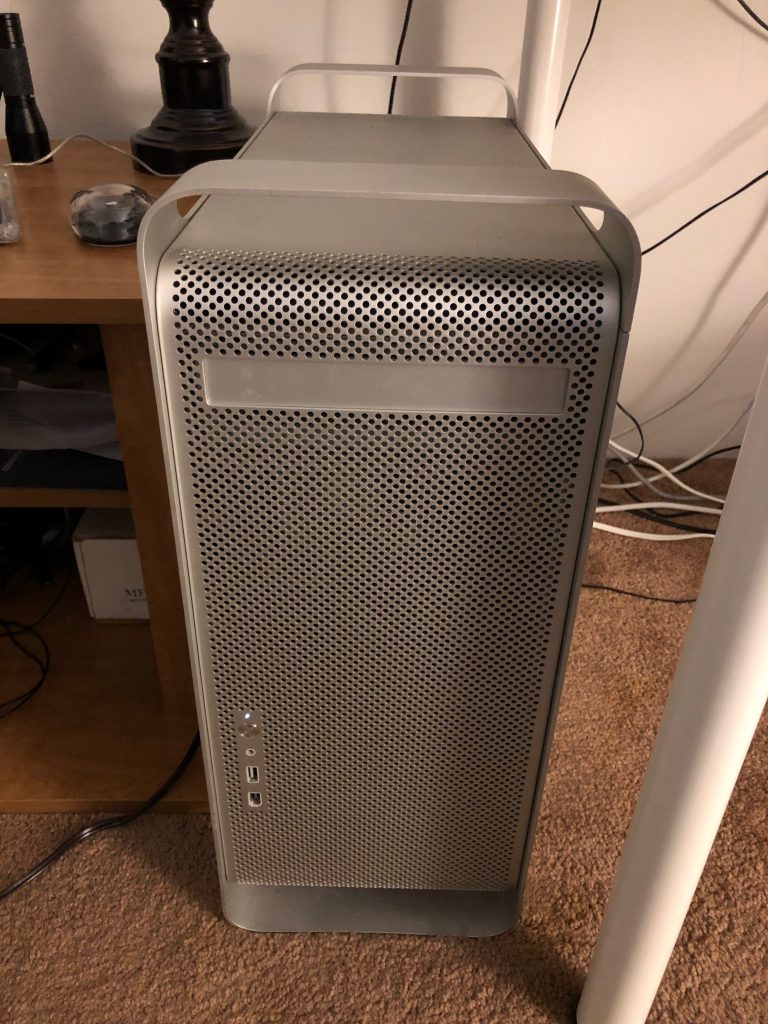 Also concluding the challenge is James.

Been mostly playing music through Youtube via OneWindowBrowser and iTunes. OneWindowBrowser calls on Quicktime Player to then stream the audio portion of Youtube videos, perfect for a kind of on demand way of listening to music. iTunes of course is good for internet radio streaming and any music stored locally on the system. I found that the audio chip on the Clamshell to be quite good and was surprised at how it sounded with headphones.

Also, I did fire up the G4 to do some cleaning up and transferring files not needed on the Clamshell to the G4. With OS 9 and Tiger on a 6 gig hdd, space is a bit cramped and I try not to drop below 2 gigs of free space. Strangely enough Apple hit me with an Update for Java and something to do with CD/DVD sharing. took a screenshot due to it being kind of amusing. 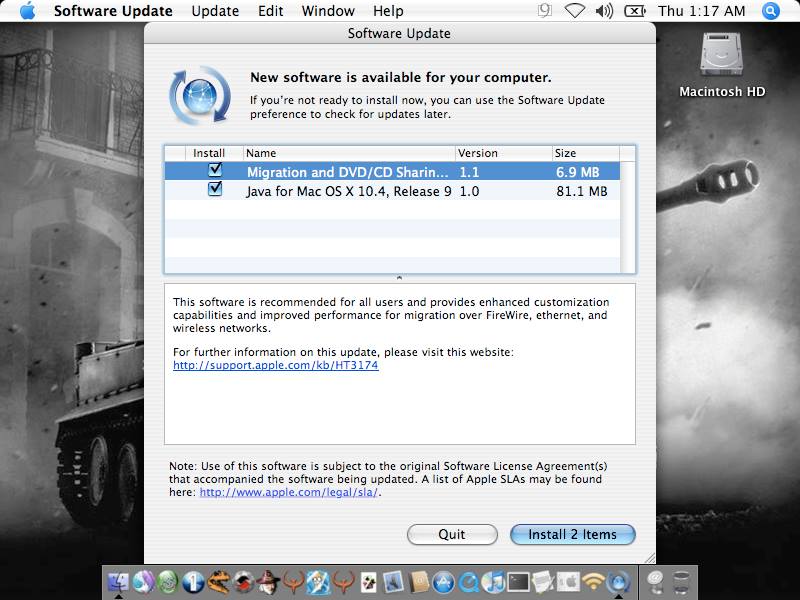 There may be some Challenge participants that send in their reports later, if so we’ll add those to the appropriate day reports when they come in.